Looking Toward May Day 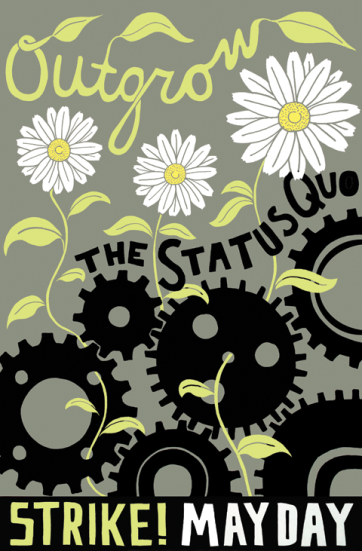 So, I completely fell off the blogging train during the month of April. Just as work on my dissertation proposal subsided, May Day meetings kicked into high gear. Or rather they’d been in high gear, but my schedule finally opened up enough to let me participate in more than a token manner. Hopes–mine, ours, the movement’s–are running high. A good turnout and a well executed day of action could fling OWS back into the news cycle (for whatever that’s worth) and provide momentum as we move into the warm, occufriendly summer months. As of this writing, by the way, the Weather Channel has a May 1st high of 62°F and only a 10% chance of rain for NYC… let’s hope this forecast holds up.

I’m feeling good about May Day. I can’t speak to what’s in store for cities outside of New York, but activists here have been organizing for Tuesday’s general strike and surrounding activities since January. Bryant Park will blossom into a mini-festival, complete with art, music, food, and a free store. Pickets–some of which I’ll be pacing–will target corporate offices throughout Midtown. (Banks have already hired Pinkertons–yes, those Pinkertons–to protect the “elks” in the boardrooms from the “wolves” of Occupy.) 100 or so academics, teachers, and others will offer teach-ins in Madison Square Park. In addition to OWS, labor unions, immigrant groups, and student organizations, the massive solidarity rally in Union Square will feature Tom Morello, Das Racist, Dan Deacon, and more. Then we’ll all march to Wall Street and rock the Financial District with an Occupy Afterparty.

As with the Occupy Movement in its entirety, what will constitute a success on May Day is an open question. Is it 30,000 people marching down Broadway? A return to national prominence after a winter of scant media attention? The strengthening of bonds between OWS and labor & immigrant groups? An NYPD overreaction that (again) reveals how the tight reins on our freedom of assembly and systemic suppression of a public that attempts to use public space?

Me personally, I’m interested to see the organizing capabilities of Occupy 2.0 in action. As NYU prof Nick Mirzoeff pointed out in my class with him today, OWS became more of what it claimed to be in the months after the eviction of Zuccotti. The operation running out of Liberty Square was certainly democratic, but it was also fundamentally centralized. The General Assembly was the hub of the Occupy wheel. Now that internal politics have led to the effective dissolution of the NYCGA, the movement in New York is now functionally the decentralized network it always asserted itself to be. Working groups meet, they coordinate with each other (or they don’t), affinity groups pursue their own activities, and individual activists float among and between these spheres. If numbers show up on Tuesday, it will go a long way toward exposing the choice between logistical efficacy and diffuse, horizontal organization as a false one. We can have our direct democracy and organize it, too.

May Day could be disappointing. I don’t think it will be, but it could be. A stormy day would be enough to make our numbers plunge. In that case, well, you’re best off leaving me to my dog, my scotch, and reruns of Ancient Aliens on May 2nd. Honestly, though, even if May Day disappoints (BUT IT WON’T), it shouldn’t demoralize. We’re trying something new here and if we fall short every now and then, that’s part of the process. We learn, we adapt. And no matter what happens, we shouldn’t take shit from members of the Democratic Party who don’t see Occupy as anything more than potential ballots in the voting box. In 2008, we gave them the Presidency, a filibuster-proof majority in the Senate, and 79 seats over the GOP in the House. They also had a rage-filled mandate against capitalist excess following the once-in-a-generation Wall Street collapse. It’s 2012 and we’ve seen no significant shift in the way we organize our economy or regulate our financial sector. Even healthcare reform–the Dems’ signature achievement, albeit a watered-down one–is about to smashed to pieces under the gavel of Antonin Scalia & Co. So I hope you’ll forgive my unwillingness to be lectured by establishment liberals on “the failures of Occupy.”

Enough glum talk. Spring is coming. A Global Spring leading–at least in my imagination–to a second Summer of Love. Or wait. Screw that. Forget the old tropes. In Occupy, we’ve got dreadlocked hippes working with union folks from the SEIU. Workers & students, immigrants & radicals. Something special is happening here, something potentially bigger and more important than our 60s forebears ever managed to pull off. Am I dreaming? Maybe. But if you’ve surrendered your ability to dream, you’ve surrendered far too much. 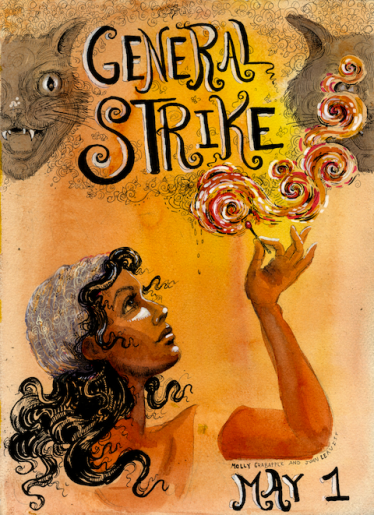 May Day events in NYC (for a more complete schedule, click here):

2pm: March from Bryant Park to Union Square, led by Tom Morello of Rage Against the Machine and the Guitarmy

7pm: Staging for the Afterparty

This entry was posted in Uncategorized and tagged May Day, Occupy, OWS. Bookmark the permalink.